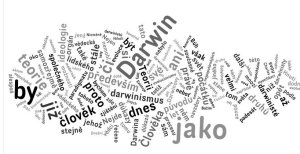 Lidové noviny reports the latest iconoclastic view to emerge from the entourage of Czech President Václav Klaus: The deputy head of the presidential chancellory Petr Hájek tells a seminar of the President’s CEP thinktank that the theory of evolution is ‘erroneous’ and that Intelligent Design should taught in Czech schools. Evolution is – yeah, you guessed it – suspected a left-wing ideology. Should you want to, you can read the whole thing here
I suppose we shoud acknowledge that CEP does tackle controversial themes that others in Czech politics avoid and occasionally comes up with sensible conclusions (on pro-natalist population policy, for example – VK was against) . And Hájek is admittedly something of a loose cannon, retained as Klaus himself has occasion suggested on occasional for his aggressive and (sometimes) brilliant camapigning (He is the man who thought up the ‘Head Up’ slogan that pulled Klaus’s Civic Democrats back from the electoral bring in 1998), but you do sometines wonder where the contrarianism of the Prague Castle will lead next. Herbal cures for AIDS? Holocaust denial?