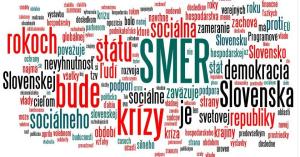 And, as I know you’ve all been lying awake, wondering about the politics of Central European social democracy, here’s a quick Wordle-ization of the prgramme that Robert Fico’s Smer is serving up to the Slovak electorate for their also forthcoming elections – as in the CR from an eroding position of strength but as a dominant and incumbent party, rather than the kind of hard hitting opposition you wouldn’t want to meet on a dark night in the middle of a tricky EU presidency.

Compared to their Czech colleague Smer’s programme throws up a lot less in the way of concrete policy, stresses the words ‘Slovak’ and ‘state’ an awful lot – suggesting a more nationalist note (as frankly you would expect) as well as the party’s name. The spread of key words also suggests greater emphasis on the politics of anti-crisis and the country’s position in the world economy.