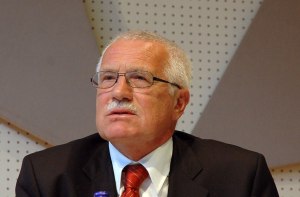 In many ways a medium-sized Central European country like the Czech Republic could hardly have wished for a better president: an experienced, energetic and erudite politician of international standing able to engage both with the big European issues and handle the domestic problems thrown up by fractious politicians and crumbling coalition governments.

A president tough-minded enough to periodically remind its citizens that they were living not in an impoverished mafia state, but in a tolerably well-administered, reasonably prosperous, if inevitably flawed, European democracy.

As president during the last ten years Václav Klaus has been all of these things.

But he has also been a blisteringly controversial head of state, whose views have often been sharply at odds with most of his fellow politicians or fellow citizens. Provocative and unignorable, Klaus has been loved and (more often) loathed both at home and abroad. He leaves office facing an indictment for treason brought by opponents  for alleged constitutional violations. He is, as Czech political scientist Lubomír Kopeček rightly terms him in a recent biography, a political phenomenon.

But what lasting impacts does Klaus’s ten year period in office really leave?

If Klaus’s time as ODS leader and prime minister were largely defined by economic transformation, his presidency has been defined by European integration and debates over the Czech  Republic’s place in Europe.

Klaus had been a critic of the EU since early 1990s and his concern with the nature of Czech statehood dates from the same period.  His move towards a more traditional view of Czech national interests as defined against those of Germany and the German-speaking world also dates from before his presidency – approximately the time of ‘Opposition Agreement’  when Klaus’s ODS worked with Milos Zeman’s 1998-2002 minority Social Democratic government.

But as president his publically expressed views on European integration radicalised markedly. The EU is no longer just a set of institutions constraining Czech statehood and individual freedom, but is now seen as an almost existential ideological threat. ‘Europe-ism’ becomes most visible part of many headed hydra taking in ‘post-democracy’, concerns over global warning, ‘homosexualism’, ‘humanrights-ism’ and other Klaus bugbears. Integration had no longer merely be corrected and braked, but thrown into reverse to create a Europe of nation states and free markets.

Such a radicalisation partly reflects the greater political freedom the presidency offers. Surrounded by an entourage of his own choosing, the president was no longer encumbered by the need to compromise with party and coalition colleagues. It also reflected the changing Europe context: Klaus’s presidency coincided with the EU Constitution and its successor the Lisbon Treaty, which proved a powerful focus for him.

The eruption of the Eurozone crisis – where Klaus’s early scepticism about the Euro proved well founded – only served to define Klaus in terms of EU issues.

At the same time, however, Klaus’s euroscepticism remained oddly abstract: we knew what he feared – and most certainly what he opposed – but little about what practical steps he wanted taken.  While other eurosceptics, both in the Czech Republic and elsewhere, championed options ranging from flexible integration to à la carte Europe or full blown withdrawal from the EU, Klaus’s extensive writings and speeches offer no specific programme or strategy for the European questions that preoccupied him.

Moreover, in practical political terms Klaus’s two presidential terms were a story of defeats and climb downs. His influence in the Civic Democratic Party (ODS) he founded in 1991 waned to the point where the bulk of the party chose pragmatic accommodation with Lisbon. Offered the prospect of single-handedly blocking ratification of the Lisbon Treaty by the ambiguity of the Czech Constitution, he backed down from confrontation with the courts and parliament, signing the treaty he abhorred into law, having gained limited opt- out.  Despite leaving ODS in 2008 and saying that Czech Republic needed a new eurosceptic conservative party, he failed to found  – or even to endorse – one. Instead he was confined a destabilising, off stage presence in the internal politics of ODS, gaining some leverage over the beleaguered ODS-led governments of Miroslav Topolánek and Petr Nečas as their parliamentary majorities dissolved.

Such reticence partly reflected Klaus’s cautious political temperament. But it also highlights the underlying constraints he faced. The Czech presidency has high prestige, but limited real power. When not beset by infighting, the country’s political parties can easily bypass or over-rule the president. The Civic Democrats and the main opposition Social Democrats effortlessly marginalised Klaus in 2009 to oversee the formation of Jan Fischer’s caretaker government. Even on an issue such as registered partnership for same sex couples where parties were more disunited, Klaus’s adamant opposition counted for little and his presidential veto was straightforwardly over-ridden.

But Klaus’s defeats conceal a deeper truth. The brand of eurosceptic conservative nationalism developed by Klaus in the later part of his political career, while it appeals to some, had ultimately limited support in Czech society. This was true in 2002 when the failure of an election campaign based on ‘national interests’ the EU first led Klaus to seek the presidency. And it was true in 2013, when, poll suggests, most ODS supporters backed Karel Schwarzenberg in the presidential elections despite Klaus’s rejection of him as not properly Czech. Euroscepticism and nationalism, where they appeal to Czech voters at all, appeal to those on the left – often those close to the Czech Republic’s hardline Communist Party.

Klaus welcomed Miloš Zeman’s victory Karel Schwarzenberg in the presidential election by ironically quoting Václav Havel’s famous words from 1989 about the truth and love overcoming lies and hate. But the greater irony is that – despite vast gulf in political outlook and personality that separated them– Klaus’s presidency revealed many of the same failings and limitations as that of Havel: a head of state preoccupied by a grand political vision trapped by the constitutional weaknesses of his office; the weakness of public and political backing for his ideas; and the limited weight of his country on the international stage.

This article was first published in Czech by iHned.cz and appears here in an English version with permission.

It can also be read at PressEurop site in Dutch, French, German, Italian, Polish, Portuguese, Spanish or Romanian.