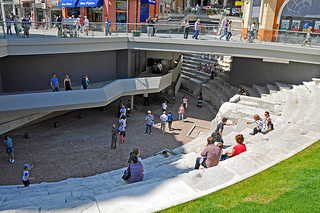 Original books often share two common virtues. They reach conclusions which make perfect sense in hindsight, but which somehow no one else managed to reach before. And they ask simple, big, often-asked questions, but answer them in new ways. Both of these apply to James Dawson’s new book Cultures of Democracy in Serbia and Bulgaria. How Ideas Shape Publics.

The book’s key finding – based on innovative ethnographical fieldwork – is that Serbia has a more vibrant and, to some extent, more liberal, public sphere than Bulgaria, despite being rated considerably lower on most governance and democracy indices (the book focuses on Freedom House’s Nations in Transit measures).

On a conventional reading this makes little sense: Bulgaria is a low quality democracy, which made slow, but steady progress towards EU membership in 2007, while Serbia slid into semi-authoritarianism following the disintegration of Yugoslavia and the wars of Yugoslav succession as the regime and (large parts of) the opposition embraced a culture of militant illiberal nationalism. Serbia began EU accession negotiations only this year and officials are carefully avoiding speculation about when it might eventually join the Union as its 29th member.

James Dawson’s book, however, tells it differently. Most conventional measures of democracy, he suggests, are too formal and legalistic, and do little to tap into the day-to-day thinking of citizens. ‘Hard’ comparative scientists are too often driven by an essentially procedurally framing of democracy leading them to overlook a multitude of defects and limitations in democratic practices. As a clever dissection of a well-known survey article in East European Politics and Societies makes clear, too many insights and observations appear simply as passing comments or incidental qualifying remarks, but in the end slip out of the final analysis.

The book addresses this gap by investigating the existence of an everyday public sphere conceived in (modified) Habermasian terms. This is investigated by examining the discourses employed by citizens in two provincial cities, Niš in southern Serbia and, Bulgaria’s second city, Plovdiv using an ethnographic method embracing both focus groups and more embedded forms of participant observation: following in the footsteps of Nina Eliasoph in her study of the culture of political avoidance in US civic voluntarism, Avoiding Politics, Dawson immerses himself in local associational life to reach a cross-section of informants in terms of age, education levels and sociological types:

I participated [he writes] in the activities of almost any available recreational and civic associations [in the two cities] which would accept me as a member. These included a mountaineering club, a careers office, an ‘alternative’ NGO, a sports club (Serbia), a private language school, an environmental NGO, a running club and a dance class (Bulgaria)

The result are slices of ethnographic data, which are both vivid and revealing opening up a world of what Dawson terms (adapting the nationalism literature) ‘everyday democracy’: one serving and two retired Serbian army officers walk up a mountain talking over who lost Kosovo; Bulgarian friends pick over the corrupt municipal politics and the still dirtier (in both senses) politics of local rubbish collection, touching on issues of clientelism and nationalism in the process; a young women denies the existence of gender discrimination, but then recounts how a job offer turned out to a thinly disguised attempt at recruitment for the porn industry and weighs up (but does not reject) her initial proposition.

This public sphere and public sphere pluralism Dawson seeks out is not some Habermasian abstraction but a curiously every day, workaday phenomenon, both less and more than formal, institutional civil society.

At least where it exists. For the book’s headline finding is that while Niš does contain ‘vibrant communities of everyday debate’, ‘… the most remarkable thing about the public sphere in Plovdiv was just how rarely it was encountered’. This is especially the case for the minority of citizens in both countries who are, as Dawson puts it, ‘hard liberals’: the 10-15 per cent of the population who may be expected to develop and articulate a consistent discourse of liberal democratic citizenship, anchor democracy in both value and discursive terms, and perhaps act as focus of cultural change.

Why should be the case? This is perhaps an unfair question. Ethnographers are focused on meaning not causation. However, Dawson permits himself a hunch –and social researcher of all kinds should surely be allowed hunches? – that the more open and liberal political culture of socialist Yugoslavia has in some ways been carried through from the 1980s and fed into a distinct liberal public (or ‘counter public’). In Bulgaria, by contrast, despite more peaceful, institutional and economic patterns of development after 1989, legacies of a more authoritarian and closed form of communism have left a citizenry, whose most liberal ‘counter-public’ is still marked by illiberal nationalism and a view of liberal politics as mostly about forcing through (economic) reform.

The interpretation of Bulgarian liberals (in the broadest) sense of term as hamstrung by conservative and illiberal nationalism – influential perhaps precisely because it has been less militantly and radically asserted than in Serbia – is a controversial one. Many liberal Bulgarians are quick to assert that their country’s biggest problem is rampant corruption not rampant nationalism. In terms of action-this-day issues, this seems hard to argue with, but there seems sufficient evidence – as in the current dispute over Turkish language TV news – that the position of the Turkish minority cannot be taken for granted. Lessons from Hungary and elsewhere in the region suggest that all bets about what ‘cannot’ happen in CEE are now off. However, this perhaps misses the argument which is, in the end, more about the subtle influence of culture and discourse, rather than a scorecard of directly traceable political outcomes.

A similar set of question arises over the sustained mass protests in Bulgaria 2012 -13, which took place after the book’s fieldwork was conducted. If Bulgaria’s public sphere and liberal ‘counter-public’ were so weakly developed, how and why were civil society and social movements able suddenly to mobilise to hold corrupt elites to account? This issue is partly addressed in the preface and postscript (which also deals with the rise of the supposedly reformed nationalists of the Serbian Progressive Party [SNS].

Here, Dawson argues that while events in Bulgaria are positive in terms of long-term civil society development  there is still greater reason for optimism in Serbia and pessimism in Bulgaria (especially beyond Sofia). ‘[T]here is’ he writes ‘little evidence that Bulgaria’s anti-government protests aspire to any emancipatory vision approaching the philosophically consistent liberalism of the cosmopolitan anti-nationalist, feminist and LGBT movement still audible from the margins in Belgrade’ and had that the protests, in particular, done little to challenge conservative nationalist assumptions underpinning much political discourse.

In this regard – although Dawson himself does not make this link – the reader cannot but be struck by the book’s discussion of the anti-Roma protests in Bulgaria in 2011 – triggered by an incident near Plovdiv – and his informants’ discussion of them. The account that emerges is not simply an outburst of familiar scapegoating ‘anti-Gypsyism’ but of inchoate and confused anger, which (at least in the minds and accounts of some of his informants) contained social, anti-corruption and anti-elite demands distinct from the obviously racist agenda of many rioters.

It is tempting to ask whether the wave of more civic anti-government mass mobilisation that swept the country in 2012-3 – while largely devoid of anti-Roma ethnic scapegoating – drew on a similarly confused mass of frustrations based on a loosely populist, anti-elite framing of politics which had little need of a strong liberal counter-public.

Cultures of Democracy in Serbia and Bulgaria is framed as a critique of conventional, democratisation theory and a world of ‘hard’ quantitative political science reflecting – as one panellist at the book’s launch event  put it – a division between ‘accountants and poets’.

However, in many ways as book’s dissection of literature makes clear, traditional comparativists were aware of the limitations of surveys and quantitative data and keenly aware of the potential mismatch between liberal institutions and a society lacking extensive liberal values or well embedded liberal ways of thinking. Those pondering the fuzzy and much debated concept of ‘democratic consolidation’ have for years wondered whether spread of the liberal or civic culture is necessary condition of such consolidation.

Correspondingly, the book would lose much of its argumentative force in the absence of the (flawed) comparative indices it critiques (although in the bigger picture such indices do show Bulgaria as a consistent ‘laggard’ which is in many ways closer to SE Europe than the Visegrad states – indeed the latest Nations in Transit report shows improvement in the Western Balkans and backsliding in Bulgaria). Accountants read poetry, poets need the accounts to add up.

Moreover, although written in the language of Habermasian public sphere analysis and discourse theory, some aspects of the book run comfortably in parallel with mainstream, political science thinking about liberal democracy: the existence of publics and counter-publics fits well with classic and radical notions of pluralism; the emphasis on contending philosophical notions of citizenship is echoed in the literature on party based democracy and democratic quality which emphasises the need for completing programmatic alternatives,

The sense that meaningful consolidation of liberal democracy will occur only with the embedding of a widespread liberal culture is, as noted, not controversial for many political science. And this is perhaps unsurprising given that like Cultures of Democracy Serbia and Bulgaria most have a basic (if less clearly stated) normative commitment to liberal models of politics and citizenship.

Despite its unusual and inventive Bulgarian-Serbian comparison, the book appears on first reading a work of South-East European studies. Questions will, however, immediately occur to anyone familiar with the supposedly more successful liberalisers of Central Europe. If indices can be wrong – or, at least, misleading and incomplete – on Bulgaria and Serbia can they be wrong elsewhere? If similar methodology was deployed in provincial cities in liberal front-running countries such as the Czech Republic and Poland, liberal discourses might be found to be similarly anaemic and economistic.

The narrowly economic, reform oriented nature of the Bulgarian liberal discourses identified might thus be more Central European than the book allows. Indeed, I wondered what kind of liberal discourses and public might emerge if similar research was carried out in the streets, sports clubs and voluntary associations of Clacton, Colchester, Wigan or Worcester. Anti-political and illiberal sentiments – and a populist desire for an out-of-the-way ‘stealth democracy’ for emergency use only, akin to a fire escape – run deep in Western Europe and North America too.

Mature liberal democracies may also have a shortage of liberal citizens. The desire of a young liberal educated Bulgarian woman for a government of non-political businesspeople to sweep aside discredited and corrupt politicians is a source of mild shock and disappointment. But when asked in 2012, some 38% percent of UK respondents told YouGov that ‘Britain would be governed better if our politicians got out of the way, and instead our ministers were non-political experts who knew how to run large organisations’.

Despite – or perhaps even because – of its immersive sense of place and locality, it is difficult in some ways not to feel that this a book about democracy more than it is a book about Bulgaria or Serbia.

This post is based on notes made for a panel discussion at the launch of  Cultures of Democracy in Serbia and Bulgaria. How Ideas Shape Publics which took place at the UCL-SSEES School of Slavonic and East European Studies on 18 November 2014.