My summer in Hitler’s Britain 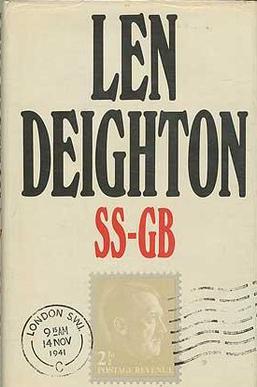 Fair use, Via Wikipedia

For light summer reading in the Moravian countryside I grabbed an old copy of Len Deighton’s 1970s alternate history thriller SS-GB – a tale of cops and spies set in an alternative 1941, where a Nazi occupation regime is bedding in following a successful invasion in 1940 (warning: spoilers follow) and C.J. Sansom’s variation on  the same theme, Dominion, set in a parallel 1950s Britain where Churchill never made it to number ten and a government headed by Lord Halifax made a fateful peace deal with Hitler after the Fall of France.

To take the history first, the counter-factual premise of Deighton’s SS-GB is clearly the weaker. Most military historians – as well as German military planners of the period – agree that the projected Operation Sea Lion would have been impossible to successfully carry without both RAF and the Royal Navy being decisively knocked out – a task well beyond the Luftwaffe and the Kriegsmarine. A 1974 wargame played between British and West German staff officers suggested that, if attempted in September 1940, Sea Lion would have been a military disaster with German invading forces being forced back from their bridgeheads in little over a week, resulting in a Nazi ‘reverse Dunkirk’. END_OF_DOCUMENT_TOKEN_TO_BE_REPLACED

Does Eastern Europe have lessons for Brexit Britain?

In the aftermath of the EU referendum a number of Central and South East Europeanists wrote blogs reflecting on possible parallels between Brexit and break-ups of multinational socialist states like Yugoslavia and Czechoslovakia in early 1990s.

There are certainly parallels to be drawn.  They lie, as Catherine Baker notes, often in the political dynamics of exiting a large multi-national structure: the desire of smaller nations (Scotland) to ‘exit the exit’; the woes of asymmetric federalism, where nations ina multinational union have varying degrees of autonomy; the changeable nature of public opinion; the EU as a symbol of modernisation and liberalism (the ‘March for Europe’, and the normalisation of  radical positions through by media coverage – and now social media ‘echo chambers;.

Scotland’s (now much more likely) exit from the UK – as noted in the lead-in to #indyref – had echoes not only of Yugoslavia’s disintegration or Czechoslovakia’s ‘Velvet Divorce’ in 1992 but also – more distantly, but perhaps more pertinently –  of the dilemmas faced by small, newly independent Central European states emerging from the Habsburg Empire in 1918. END_OF_DOCUMENT_TOKEN_TO_BE_REPLACED

It has to be the single oldest thing in the entire house:  a silver one Gulder piece from the Austro-Hungarian Dual Monarchy minted in 1878, given as a curio to one of the kids by a Czech relative.

About the size of a British two-pound coin, it’s well made and in surprisingly good condition, it would – as far as I can work out from a brief online trawl of historical statistics – once have been a sizeable chunk of someone’s weekly income. Or at least someone from lower social strata.

Its good condition is probably explained by the fact that it probably wasn’t in circulation that long. In 1892 the Gulden (known in Hungarian as the forint, in Czech the zlatý)) was replaced by a new Austro-Hungarian currency the Krone tied – with a degree of fiscal discpline that some modern day of the Euro would no doubt appreciate – to the Gold Standard. Further background can be found on the found here on the Policy and History website in a paper written by Richard Roberts in 2011, which seeks to draw lessons from the Habsburg experience of a single currency without one state. The main conclusion is that budgetary indiscipline can be fixed by tough minded independent central bank(s) policing tough fiscal rules for governments, which wish to play ball.

Despite the popularity of the Uncanny Historical Parallel as insight way into the present – BBC Radio 4’s The Long View documentary  series, for example, does a fascinating  job of ‘uncovering the present behind the past’, especially in interviews with contemporary politicians – I’m not sure if the Habsburg model of European integration, if that is what it was, has that much to tell us. As Richard Roberts notes, there is something of a difference between two governments co-ordinating to govern a single currency and  17 (or in a broad  sense 27). He also seeks the EU’s (surely now stalled?) enlargement agenda as the important and potentially derailing difference of the EU/Eurozone with the Dual Monarchy which is seen as victim of exogenous, apocalyptic shock of WWI.

All this seems rather oddly to ignore more basic political issues of identity and democracy. The Habsburg Dual Monarchy and its currency crumbled due to its inability, among many other things, to create and accomodate national political structures – six states emerged from its former territory in 1918 (today by my reckoning 11) – while the current EU seems to be struggling due to  inability to roll back and rein in well entrenched national states .

Perhaps, at bottom, despite huge democratisation of European political systems a century on, the problem is really the same – mismatch between political forms, political identities and functional economic necessities, the type of conundrum outlined by Gary Marks and Lisbet Hooghe in their ‘postfunctionalist’ take on integration a couple of years ago.

A quick root around around the odd coins and other bits of funny money amid the odds and ends on the mantelpiece reveals some Czechoslovak crowns from 1950s and 1970s and a 50 Euro cent piece with the national design of Greece.

Abe Lincoln on the beach

This small coastal town of Brittany is swathed with mist so early in the morning. There are only a couple places open to have breakfast, but there are a few people out and about including a woman with two small well groomed goats on lead heading for the boulangerie.

Luckily, the fog clear and the sun comes out and it’s time to settle on a sandy beach with some French newspapers and some holiday reading. The press has a different – and actually rather substantive – mix of bad news. Libération and Le Monde make The Guardian seem daft and fluffy: motorway tolls are up going up; Roma aslyum seekers live in Third World conditions on the streets on Marseille; a new populist faction of President Sarkozy’s party want to co-opt some of the illiberal themes of the National Front; France is friendly with unsavoury African dictators; the latests French translation of the Famous Five (Le club des cinq) is awful, fans say.

Having  swallowed a load of sea-water attempting to swim and had a coffee, I settle back with Crawley public library’s battered copy of  Doris Kearn Goodwin’s Team of Rivals: The Political Genius of Abraham Lincoln – ‘the book that inspired Barrack Obama’.  And it’s easy to see why.

career in the law and then into national politics, where he comes from nowhere to blindside the clear front runner and other established politicians, but pull them all together in a coherent adminsitration and saves the country in a time of national emergency.

The book itself is rather uneven. Despite a mass of detail the first half, which relates the background and political career of Lincoln and is three more fancied rivals for the 1860 presidential nomination of the newly formed Republican Party is absorbing . It can be read either as textbook of What It Takes To Win In Politics and a window on US political and social history, which like many Europeans I know practically nothing about.

Abe comes through on top because he is intellectual able and grasps the issues; affable , making politically useful friends as he goes and rarely making enemies; moderate and centrist within this own party without being too obviously unprincipled; a charismatic speaker and good communicator comfortable with modern media; and a good strategist and campaigner, who builds up his position by making a series of good calls over the years, rather than waging brilliant short-term campaign.

A tad too folksy and pragmatic for my taste, but likely I suspect to have been my second choice if I was a mid 19th century  US Republican – and being everyone’s second choice is, of course, an excellent strategy for the moment when, as always seems to happen, the front runner’s lead slowly and inexorably crumbles.

All in all useful advice for anyone planning a political career and a useful reminder  to me why I am not Prime Minister or President of USA.

Political scientists with a taste for historical political science in the form of a historical party formation and political realignment with an intriguing mox of social and geographical division with a strange mix of  democratic free market capitalism and slavery, which European societies seems to have separated out into motherland and colonies.

The second half of the book is a bit less focused.  All of a sudden with the White House won, we are pitched into  secession and the Civil War, of which Lincoln’s victory (or rather that of any Republican candidate, I assume) is the casus belli. From thereon  in we get a  rich, but rather knotty narrative covering manoeuring and man management within the Lincoln administration(s),  the domestic politics, and diplomacy of the Civic War and the unfolding military picture.

It basically draws to a close with Lincoln’s assassination and a brief epilogue of the main dramatis personnae, most of whom seem to end up personally and politically unfulfilled with their greatest days behind them.

Overall, a readable if uneven holiday reading, but you feel basically rather uncritical in its treatment of Lincoln, whose political virtuosity seems in the end of the less interesting things about him.