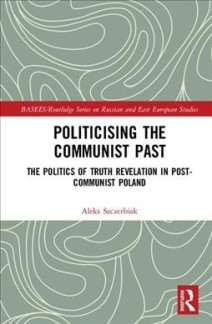 Fair use for review purposes

Lustration, the systematic vetting and exclusion from high office of communist-era secret policemen, secret police informers and (sometimes) top-ranking Party bosses, has rather slipped out of the headlines in recent years.

The occasional high-profile case still surfaces. The Bulgarian authorities’ recent revelations that the psychoanalyst and philosopher Julia Kristeva collaborated with the country’s secret police in the early seventies to buy a few favours from the regime for family and friends, for example, briefly garnered considerable international media attention.

But these are the exceptions not the rule. The passage of time has blunted the relevance of lustration laws – anyone not now in their mid-late forties would have been children when communism fell.

And politically, a quarter of a century since the fall of communism, many Central and East European countries have either done what lustration they can or want to do, or bypassed the issue and let communist-era securocrats blend seamlessly into the new political and administrative elites.  The recently “re-elected” Vladimir Putin epitomizes this second pattern.

Not so in Poland, argues Aleks Szczerbiak in his new book. END_OF_DOCUMENT_TOKEN_TO_BE_REPLACED