A spectre of … something is haunting Europe At 8.30am I am sitting in a thinktank seminar on ‘subterranean politics’ in Europe.  At 8pm I am sitting in launch event for a book about populism in Europe and the America. It is a long day framed with big questions and incomplete answers.

At one of the regular European Council for Foreign Affairs regular Black Coffee Mornings Mary Kaldor of the LSE launches her project team’s new report on Subterranean Politics  in conversation with Mike Richmond of the Occupied Times.  ‘Subterranean politics’ is an appealing term, but a vague (and undefined) one intended to capture a plethora of alternative and protest phenomena: new anti-capitalist social movements (like the much feted Occupy), successful far-right parties like Hungary’s Jobbik or the True Finns; sundry less easily categorisable new parties like the German Pirates or Italy’s Five Star movement and broader, more subtle – perhaps truly subterranean – changes wrought on citizens and politics by the internet and below-the-radar reactions to the crisis.

The more interesting argument is that what has changed is such fringe, anti-establishment phenomena are bleeding into the political mainstream and what they all have in common is demands for new forms of politics, rather than simply demands for economic redress – economic crisis triggering political crisis. It isn’t entirely clear how these impacts are supposed to happen (or indeed if there was a common impact). The clearest answer offered –referencing some rather well established academic ideas about social movements- was that we were in a new cycle of protest and that the generational change would bring this about change in the mainstream, perhaps in the similar way that the demands and leaders of 1968 were gradually incorporated into academic, political and cultural establishments of 1980s and 1990s.

(The more conventional party-political far left, oddly, didn’t get a mention, although Greece’s Syriza perhaps illustrates margins-to-mainstream transition of the most direct and immediate kind under conditions of acute crisis).

Europe, needless to say, was absent from the idea of various practitioners ‘subterranean politics’ as it is from much conventional political discourse, regarded as distant, technocratic and neo-liberal and generally part of the problem. Perhaps the focus on the national level, someone suggested, would in time gradually further stoke xenophobia. Overall, the impression is of discussion feeling its way uncertainly along, sensing political and social change – of ‘something kicking off’ to borrow Paul Mason’s phrase, but unable adequately to name more than a few of its parts or move beyond a rather flakey zeitgeistish rhetoric of a ‘global revolutions’ linking Tahir Square to Westminster and Wall Street . Instead it seems to collapse in on itself, recycling familiar debates about national and European democratic deficits, the rise of the far right and citizen distrust of politicians. Ideas floated to remedy the malaise – localism, new institutions to meet a (supposed) public yearning for participation, the use of social movements as a space for deliberation and reconfiguring, Tobin taxes – seemed well worn and oddly moderate.

Pretty much the stuff that establishment politicians and journalists are already taking about surely? Have the margins already shaped the mainstream? Or are the new politics of crisis and uncertainly less a product of the woes of capitalism and the Eurozone than a continuation of much longer term democratic deficits?

By evening I have  moved to home ground – and moved on to drinking black sugary tea –  for the launch at UCL of a new book on Populism in Europe and the Americas.  Although co-sponsored by the Counterpoint thinktank the discussion at this 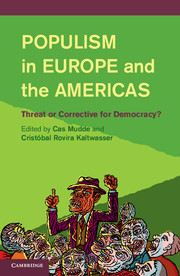 second event was resolutely more academic: the book is a new collection which – as co-editor Cristóbal Rovira Kaltwasser and co-discussant Paul Taggart made clear – ambitiously tries to combine inter-regional comparison (European populism mainly radical right, Latin American radical left(ish) – reflections on whether populism was a boon or bane for democracy (an overview of the argument can be found here )

I had mixed feelings about this. Despite having written a case study chapter in the book  (on the Czech radical right)– and liking the sweep of the comparision  I sensed that events were rushing ahead: as the  Subterranean Politics briefing flagged up, European populist phenomena, are far from confined to the far-right. Indeed, oppositional, anti-establishment, anti-elite mobilisation appears so diverse and fragmentary that much debtated, well honed concepts of populism and populist parties  almost appears something of straitjacket. Perhaps it always was.